In one respect, DuPage County, located just west of Chicago in northeastern Illinois, is typical of many areas near large urban centers; much of the land originally destined for farming, was developed instead for residential and commercial purposes. As this happened in DuPage, an attractive area with rustic appeal, the population grew steadily to a total of 904,000 by 2000.

By the mid-1950s, it had become obvious to many that the water necessary to supply this growing county, which came from deep and shallow wells, was being depleted faster than nature could replenish it. Furthermore, the quality of the ground water did not always meet regulatory standards. Municipalities in the county, realizing that they resided only 20 miles from one of the country’s greatest natural resources, began investigating the feasibility of obtaining Lake Michigan water for DuPage County.

In 1955, the Tree Towns Commission was formed to oversee the creation of a system that would supply Elmhurst, Lombard and Villa Park with Lake Michigan water. The existence of short term ground water supply sources in DuPage, and resistance to the withdrawal of lake water, hindered progress for more than 20 years. However, requests to state and federal bodies for alternative, dependable water resources continued, and ultimately led to the formation of the DuPage Water Commission. Finally, in 1980, the State of Illinois Department of Transportation, Division of Water Resources, (the regulatory body responsible for control of Lake Michigan’s water use), granted many of the county’s municipalities an allocation of lake water.

In March of 1984, the Commission signed a 40-year agreement to buy water from the City of Chicago for redistribution in DuPage County. The Water Commission Act of 1985 gave the Commission the authority to finance, design, construct and operate a Lake Michigan-to-DuPage County water supply system.

In 1986, the Commission entered into “wholesale” Water Purchase Agreements with 23 DuPage County municipalities, and began the construction of the second largest water supply system in the State of Illinois. The Commission finally went into full operation on May 1, 1992. 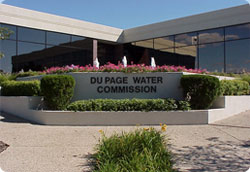